Skip to content
March 25, 2012 zaidcloud
Through SCCM, OS can be deployed on multiple numbers of computers simultaneously. In SCCM, operating system can be deployed on machines using PXE boot method. This method is used to deploy OS on bare metal machines. OS deployment feature can be also used to upgrade an existing OS on the system. Multiple set of customised OS images can be created. As per the requirement, different OS images can be used for deploying on a particular set of computers.

In this section, the complete procedure for deploying OS is provided. Operating System deployment consists of the following configurations which have to be carried out as given below:-

For machines on which OS has to be deployed through network boot method, the following pre-requisites are required to be installed and configured:-

· DHCP Service
· Windows Deployment Service (WDS)
· Configuring DHCP server
· Client machines should have network bootable LAN cards and PXE boot should be enabled in BIOS
DHCP server should be installed and a scope should be created for assignment of IP addresses. DHCP should be present on any one server in the network and should be properly configured.
NOTE: – Do not install WDS before installing and configuring DHCP server. Check whether DHCP is providing proper IP address to client machines in the network. 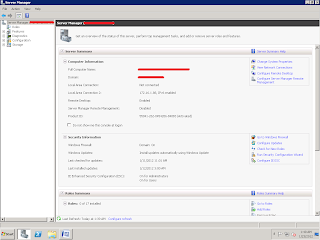 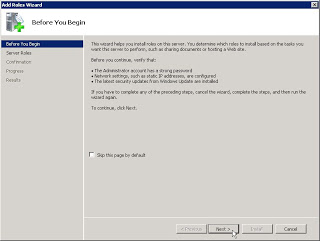 After rebooting the computer, go to Administrative Tools>Windows Deployment Services. WDS console will open as shown above.

NOTE: – Do not configure WDS server.

PXE Service point Role is already configured as above.

PXE service point is now installed and appears in the console as shown above. 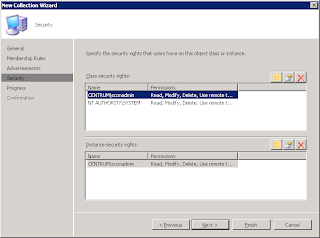 The new collection‘Kalina IT- Windows 7 Deployment’ is created and appears in the console as shown above.
The next step is to configure boot options in Operating System Deployment in SCCM. The boot files are present and configured in SCCM console. The boot files have to be updated to the distribution points.
After installation of PXE role a new distribution point gets created.
2.4 Configuring Boot Images
Boot images required for the client machines for booting and to connect to SCCM server for OS deployment are pre-configured in the SCCM server. The boot images have to be updated to the distribution points on the SCCM server. Go to Computer Management> Operating System Deployment> select Boot Images as shown below:- 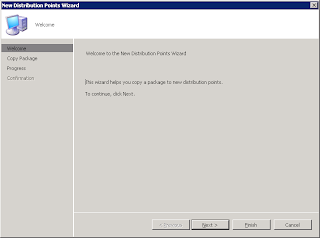 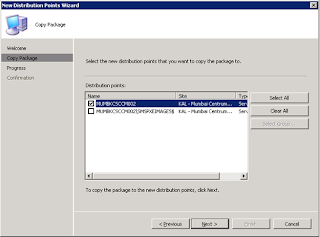 The distribution points are now configured and appear in the console. 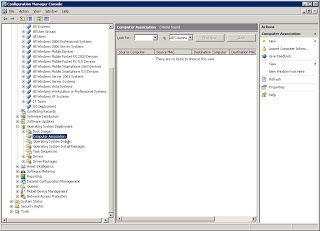 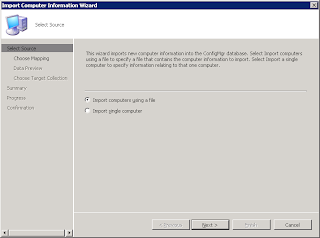 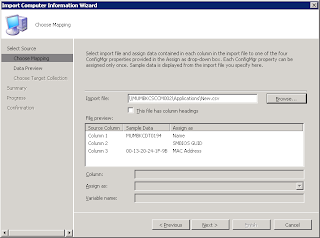 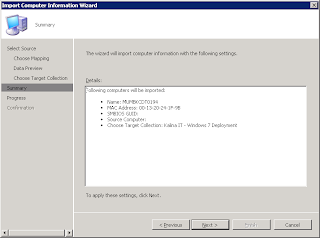 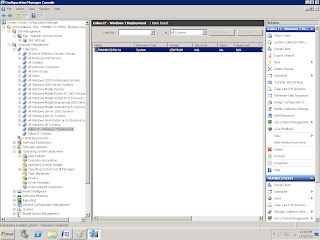 To capture the image of a reference computer, a capture CD has to be created in SCCM. To create a capture CD follow the below given steps:-

Here the boot image selected is for machines having x86 architecture. 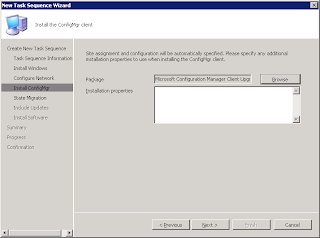 NOTE: – You need to create a package in Software Distribution of SCCM for ConfigMgr client agent which is mandatory before creating a Task Sequence for OS deployment. 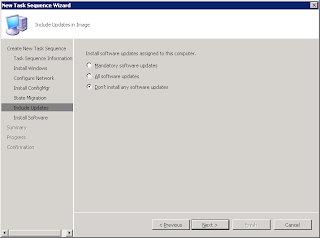 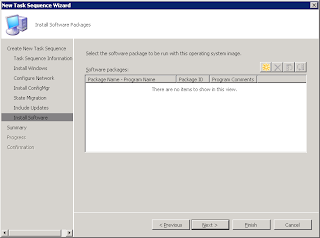 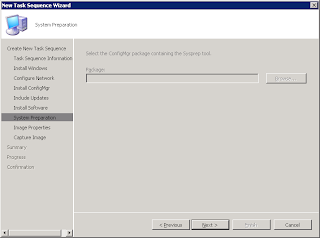 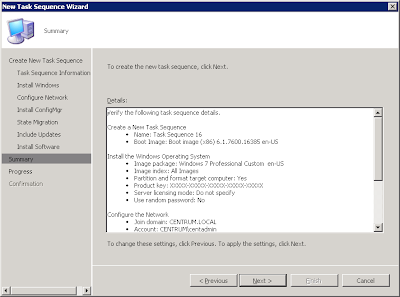 Click on Close to complete the Task Sequence wizard.

The Task Sequence is created and will appear in the console as shown above. The next step is to advertise this Task Sequence on the‘Kalina IT – Windows 7 Deployment’ collection. 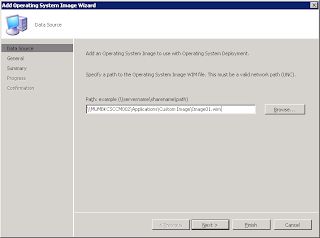 The wizard will open and in the Data Source window click on Browse and provide the path for the captured OS image file as shown above and click Next to continue. 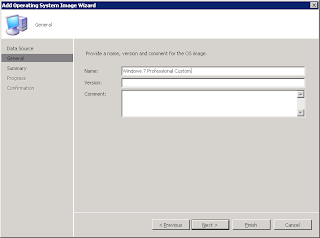 In the General tab, provide a Name and Version for the image package as shown above and click Next. 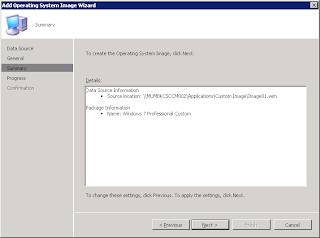 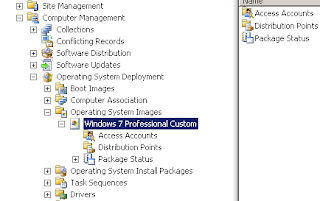 The OS image package is now created. Now you need to add and update the distribution point. 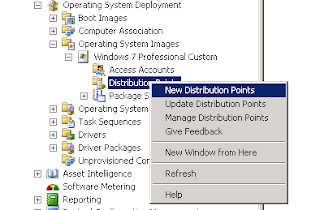 Click on Next in the Welcome page of the wizard as shown above. 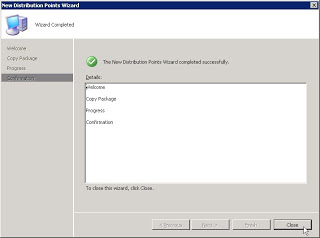 In the New Task Sequence wizard, select ‘Install an existing image package’ and click on Next. 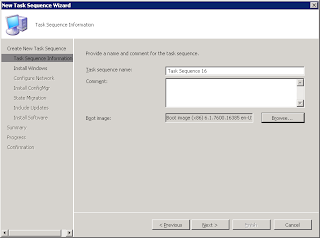 Provide a name for the Task Sequence and click on Browse to select a ‘Boot Image’ and click on Next.
Here the boot image selected is for machines having x86 architecture.

In Install Windows, click on Browse to select the OS image package. Select to partition and format the target computer. Provide the product key and server licensing mode. You can also provide the local administrator’s password for the target machine as shown above. Then click on Next to continue. 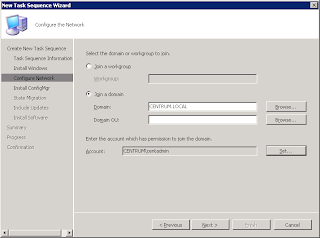 In Configure Network window, select whether the target machines should join a Workgroup or Domain. Here it has been selected to join domain ‘PRAZ.LOCAL’ as shown above.

In Install ConfigMgr tab, click on Browse and select the package for installing SCCM client agent.
NOTE: – You need to create a package in Software Distribution of SCCM for ConfigMgr client agent which is mandatory before creating a Task Sequence for OS deployment.

In State Migration window, since OS will be deployed on bare metal machines, remove all the check marks as shown above and click on Next.

In Include Updates tab, as the updates will be installed after the OS is deployed, select ‘Don’t install any software updates’ as shown above and click Next. 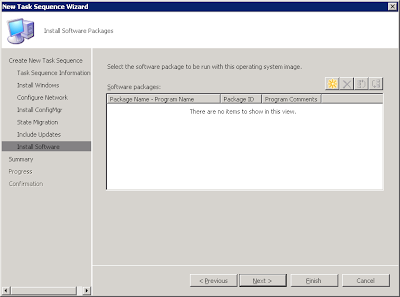 In Install Software tab, you can select any other application package during the setup of OS otherwise click on Next to continue. 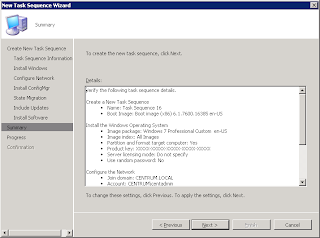 The OS will be deployed only after the Task Sequence is advertised on a particular collection. You need to be very careful during advertising the Task Sequence, since it will wipe out the complete disk and install a new Operating System on the machines.

In the General tab of New Advertisement Wizard, provide a name and for ‘Task Sequence’ option, click on Browse to select the Task Sequence. Then for ‘Collection’ option, click on Browse and select ‘OS Deployment’ collection on which the OS has to be deployed.
NOTE: –Make sure to check mark the option ‘Make this task sequence available to boot media and PXE’
If you do not check mark this option then the client machines will not receive the task sequence after booting through PXE boot option. Then click on Next to continue. 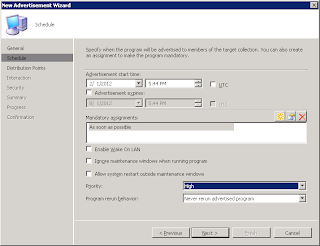 In the Schedule window, click on the flower (orange)button and a new window will open. 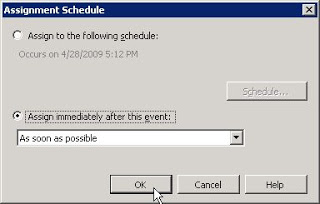 Select ‘Assign immediately after this event’ and click on OK to continue.

Keep the Priority option as ‘High’ and set the Program rerun behaviour as shown above.

In Distribution Points tab, select the options as shown above and click Next to continue.

In Interaction window, select ‘Show the task sequence progress’ and click Next to continue.

Keep default settings in Security page and click on Next as shown above.

Click on Next in the summary window.
Click on Close to complete the advertisement wizard.
The task sequence has been advertised on the Kalina IT – Windows 7 Deployment collection. The machines present in this collection only will receive the OS package. Go to ‘Advertisements’ in SCCM console and check that the task sequence has been advertised as shown below:-

Go to the client machines and enable the PXE boot option in BIOS. Boot one client machine through PXE boot option and check the installation of the OS. Once the OS gets installed successfully then you can deploy the image on multiple computers simultaneously.
NOTE: If OS has to be deployed across two different VLANs and if DHCP server is present in another VLAN then for OS deployment to work across VLANs you need configure the switch by adding the following commands as given below: –
ip helper-address pxeServerIPAddress
ip helper-address dhcpServerIPAddress
ip dhcp relay information trusted
2.8 Creating Stand-alone Operating System media
A stand-alone Operating System media can be created for deploying OS image which can be done without connecting the client machines to the SCCM site server.
To create a stand-alone OS media right click on the task sequence created for an OS as shown below: – 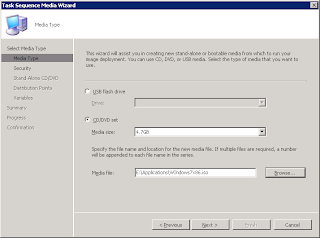 In the Media Type option, select media size and provide the path to save the .iso file as shown above.

The next window will show the properties of the task sequence. Click on Next to continue.

After adding the distribution points click on Next to continue

Variables for the media are not required. Click on Next to continue.

Click on Next on the Summary window as shown above.

The media creation process will begin and this will take some time.

Click on Close to complete the creation of the OS stand-alone media.

Browse to the location of the .iso file. The Windows7x86.iso file here is ready. Burn this .iso file on a DVD and check with the installation of the Operating System. This DVD is a bootable DVD hence it can be used to deploy OS on new machines also.

I am technical consultant with more than 10 years of experience in IT domain. I have worked on various technologies starting from client side engineering to Private/Public cloud.
This blog is more of my cheat reference for my future work. And provide some contribution back to the amazing community.